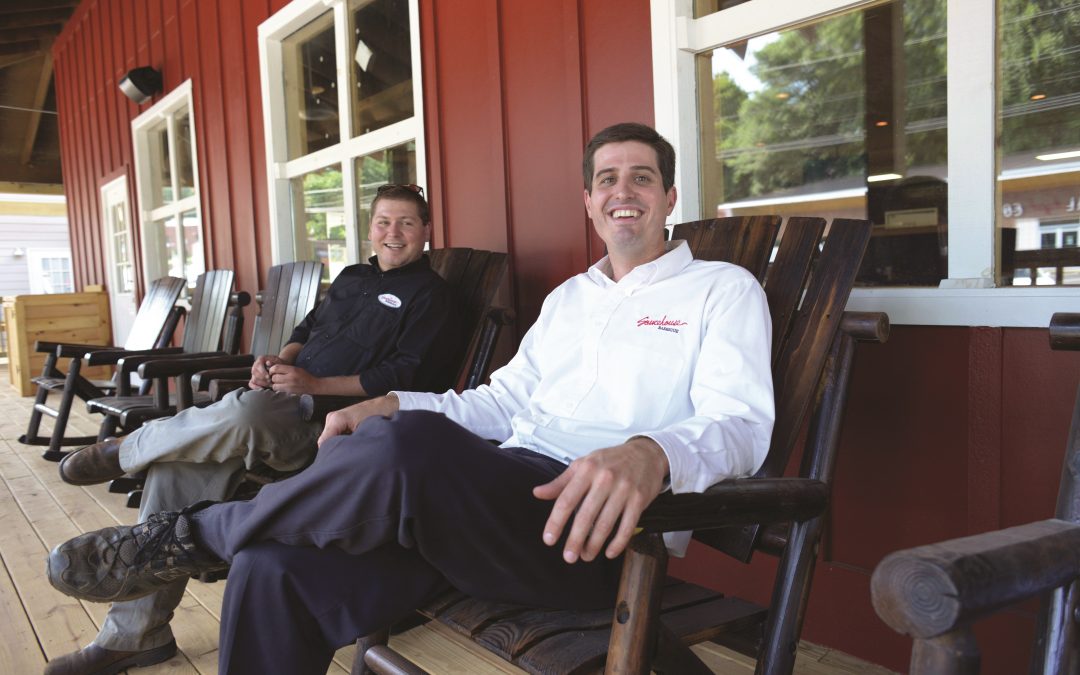 The University of Georgia Alumni Association recognized the fastest-growing companies owned or operated by UGA alumni during the ninth annual Bulldog 100 Celebration on Jan. 27 at the Hyatt Regency in Atlanta.

The 2018 fastest-growing business is Saucehouse BBQ, co-founded by Christopher Belk, who earned his bachelor’s degree in political science in 2005 and his MBA in 2013. Belk is from North Carolina and his co-founder is from Alabama. The pair wanted to highlight the regional differences in barbecue, so customers are offered a variety of sauces for their slow-smoked meats and homemade sides. The restaurant and catering company is based in Athens, with a new catering branch open in Atlanta, and is open for breakfast, lunch and dinner.

Saucehouse was featured in SPIA’s first edition of We The People. Read his story below.

Walking up to Saucehouse is like entering the epitome of Southern hospitality.  A cool front porch greets you with rocking chairs lining the walls.  The beer garden on your right rings with the sounds of live music and people playing cornhole. From here, you can choose to enter the fast-casual dining room, the 21-and-up bar or take a seat on one of the many porch swings that are sprinkled around the property.

“We want our customers to feel at home,” said Saucehouse co-founder, Christopher Belk.  “We want to offer a great product at a great price with great customer service. The atmosphere just puts us over the top.”

As a native North Carolinian, Belk grew up being sure of two things: politics and barbeque. After a serendipitous trip to a University of Georgia football game as a high school senior, Belk knew Athens would be his home for the next four years.

After trying his hand as environmental science and business majors, Belk landed in the School of Public and International Affairs as a political science student — a decision he feels shaped his entrepreneurial spirit.

“I love being plugged into world affairs and politics.  So when I took political science classes, it didn’t feel like homework.  I just enjoyed it. I excelled in that, I guess. It was interesting. I wanted to learn what was being taught.”

After graduating from college in 2005, Belk moved to Colorado where he waited tables  at a ski resort.  He says figuring out what he wanted to do with his life meant first finding out what he didn’t want to do and then following his passions regardless of the financial restrictions.

In 2006, Belk moved to Atlanta and started his career in sales at Red Diamond Coffee and Tea Manufacturing Company.  In the midst of his successful sales career, he completed a fast-track Executive MBA program and found himself immersed in the world of business.

Seven years later, the idea of Saucehouse was born.

“It all started with a vision of the line,” he said referring to the fast-casual restaurant model that has become so successful with chains like Chipotle and Subway.  “Fast-casual is the fastest-growing trend in the industry… we’re hoping to be the first fast-casual, customizable barbecue restaurant.”

With his business plan in one hand and his passion in the other, Belk took to the road to find the best barbeque in the Southeast and to hone in on his vision.  With business partner and co-founder Charlie Nix by his side, they together have built their brand from the ground up — literally.

According to Belk, finding the perfect location was key, so when the old Peaches property on Broad Street came on the market, they immediately jumped at the chance.  Tearing down the existing structure and building a barbeque empire (mostly with their own hands) was not easy or fast, but it was the dream.  To support the project, Chris and the Saucehouse team began catering out of an industrial kitchen in Bogart — a strategic move that has catapulted their brand to the top of the market in Athens.

Now, as you ride down Broad Street headed to Sanford Stadium, you can see lines of enthusiastic fans wrapped around the building, waiting for their barbeque sandwich, nachos or potato.  You might also take notice of the water tower that has quickly become an Athens icon.

“That’s where we tell all the kids that we keep the sauce,” Belk said laughing, but in reality, the water tower was built as a landmark.  “Every barbeque joint is described by its surroundings. We knew we wanted to have something signature, so we built a landmark.”

Since they opened the doors in August, Saucehouse has been thriving.  On football Saturdays, it’s hard to miss the unique and successful team of Chris and Charlie driving down Lumpkin Street, delivering food straight from the smoker attached to their truck.